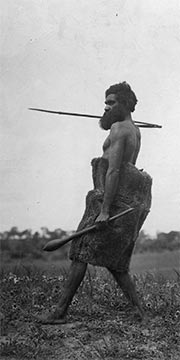 For many thousands of years, the lower Murray River, Lower Lakes and Coorong region was one of the most densely populated areas of Australia. These waterways were home to thousands of Ngarrindjeri Aboriginal people.

The Ngarrindjeri have a timeless connection with the lower Murray River, lakes and Coorong. They lived in communities in this environment, referred to as their supermarket. Everything Ngarrindjeri needed was here – clean waters, foods, medicines, shelter and warmth.

The river supported healthy populations of waterfowl, mussels, cockles, salt and fresh water fish, turtles, kangaroos, possums, native fruits and vegetables. What Ngarrindjeri people didn’t have they traded with groups further upstream and inland. They were renowned for being ‘big, strong and healthy’ due to their varied diet and knowledge of the land.

The Coorong is a major focus of Ngarrindjeri culture and economy. People still know their special places, continue to visit and care for the country, and tell the stories that keep it alive. The Coorong estuary, rivers and sea have sustained Ngarrindjeri for thousands of years. After European settlement, Ngarrindjeri were employed in seasonal work and continued hunting and gathering to supplement their diet. Elders taught children about the stars, the land, food, plants, medicinal plants, the ways to hunt and gather their foods and their knowledge of family history. This knowledge and practice is continued today by the present generations in their struggle to care for country.

Reminders of the original inhabitants of this area can be found in our coastal parks. The Aboriginal people have lived in the area for thousands of years with the sea and coastal lakes providing an abundance of food. Heaps (middens) of discarded remains of shellfish, cooking ovens, camp sites, flaked stone debris (which are discards of the tool-making process) and burial sites are located in these parks.

Several shell types are found in the middens including turban shells, mussels, limpets, abalone and reef molluscs which indicate the sort of food eaten thousands of years ago. In the Coorong, most middens only contain the cockle. Please remember that all Aboriginal sites are important both culturally and scientifically. Relics must not be disturbed or removed.