The Birdman of the Coorong

Thought to be South Australia’s only genuine bushranger that roamed the Coorong on an ostrich!

John, Francis Peggotty was born in country Limerick in 1864. He was born a tiny baby and grew to be a very small adult with childlike features which he used to the disadvantage of his victims. For reasons unclear, John travelled to South Africa in his late teens where  he learnt to manage and ride ostriches.

With the stature of a seven year old child riding atop an ostrich was of no effort to him or the bird. On his return to England Peggotty became a thief with a difference. Being so small he scampered down chimneys of the wealthy and stole jewellery – gold jewellery being his fancy. Eventually this trade caught up with him as he had a tendency to flaunt his ‘winnings’  by draping the lode over his body and parading around half naked. 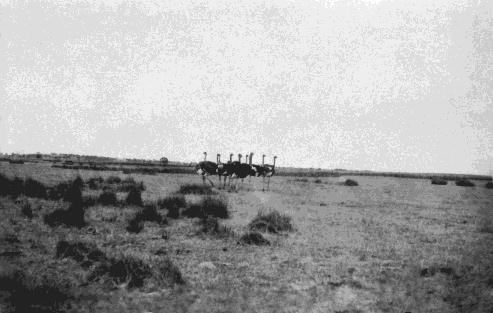 It is noted that there were wild Ostriches in the Coorong area. Several farms in the Lakes region had bred them to harvest their feathers. Up until the late 1960s early 1970s (maybe even later) they were still found feral on the Narrung Peninsula and Coorong. Picture left shows feral ostriches in the Coorong region in the 1960’s

After a relatively short prison sentence  he decided to travel to Australia to live with his farming uncle in NSW but he was not inclined to work on the farm and was caught adorning himself with his wife’s jewellery on more than one occasion. From NSW he travelled to Adelaide to join a friend but soon slipped into the old trade of thieving with a gang of likely lads most of whom  were caught by the police so Peggotty laid low for a few years. He eventually turned up again in the Coorong.

He was labelled the most eccentric bushranger in the history of Australia as he was often seen stripped to the waist and wearing stolen gold jewellery whilst brandishing two ornamental pistols and riding an ostrich. 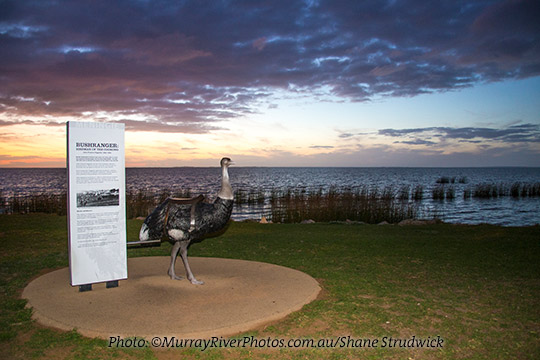 Peggotty was credited with more than a dozen hold-ups and murder of several travellers in the area before his career ended in September of 1899. A fisherman by the name of Henry Carmichael was less than impressed by being held-up  by the diminutive, jewellery laden, ostrich rider and gave chase on his horse. He was a crack shot and had a long range rifle which wounded  the rider and killed the ostrich.

By the time Carmichael reached the ostrich corpse the wounded  Peggotty had scampered off leaving a thick trail of blood  in the sand. He had made it to thick scrubland so Carmichael was not willing to pursue this armed man under cover. Peggotty had at least 2 bullets in his body and was bleeding profusely – Carmichael new that he would perish in the sand hills of the Coorong  and so departed  to report his impending  death to the authorities. Peggotty’s  body was never found,  his bones  still lie in the Coorong along with at least 1 million dollars’ worth  of gold and jewellery.

An article from the ‘People’  magazine, possibly from the 1960’s has a curious story to tell about a bushranger in the Coorong who rode an ostrich.