Born at the Point McLeay Mission on the banks of Lake Alexandrina in the Coorong region of South Australia, Unaipon was the fourth of nine children of James and Nymbulda Ngunaitponi. Unaipon began his education at the age of seven at the Point McLeay Mission School and soon became known for his intelligence, with the former secretary of the Aborigines’ Friends’ Association stating in 1887: “I only wish the majority of white boys were as bright, intelligent, well-instructed and well-mannered, as the little fellow I am now taking charge of.” 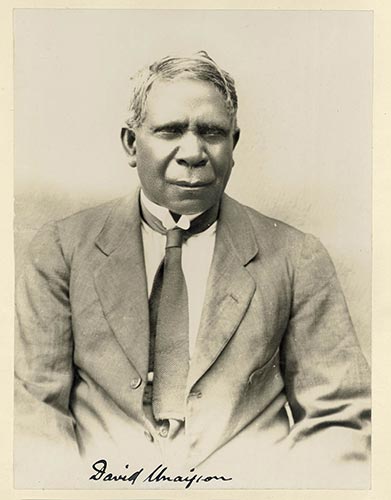 Unaipon left school at 13 to work as a servant for C.B. Young in Adelaide where Young actively encouraged Unaipon’s interest in literature, philosophy, science and music. In 1890, he returned to Point Mcleay where he apprenticed to a bootmaker and was appointed as the mission organist. In the late 1890s he travelled to Adelaide but found that his colour was a bar to employment in his trade and instead took a job as storeman for an Adelaide bootmaker before returning to work as book-keeper in the Point McLeay store.

On 4 January 1902 he married Katherine Carter (née Sumner), a Tangane woman. He was later employed by the Aborigines’ Friends’ Association as a deputationer, in which role he travelled and preached widely in seeking support for the Point McLeay Mission. Unaipon retired from preaching in 1959 but continued working on his inventions into the 1960s.

Unaipon took out provisional patents for 19 inventions but was unable to afford to get any of his inventions fully patented. His most successful invention (provisional patent 15 624), a shearing machine that converted curvilineal motion into the straight line movement which is the basis of modern mechanical shears, was introduced without Unaipon receiving any financial return and, apart from a 1910 newspaper report acknowledging him as the inventor, he received no credit.

Other inventions included a centrifugal motor, a multi-radial wheel and a mechanical propulsion device. He was also known as the Australian Leonardo da Vinci for his mechanical ideas, which included pre World War I drawings for a helicopter design based on the principle of the boomerang and his research into the polarisation of light and also spent much of his life attempting to achieve perpetual motion.

Unaipon was obsessed with correct English and in speaking tended to use classical English rather than that in common usage. His written language followed the style of John Milton and John Bunyan.

Unaipon was inquisitively religious, believing in an equivalence of traditional Aboriginal and Christian spirituality. His employment with the Aborigines’ Friends’ Association collecting subscription money allowed him to travel widely. The travel brought him into contact with many intelligent people sympathetic with the cause of Aboriginal rights, and gave him the opportunity to lecture on Aboriginal culture and rights. Although he was much in demand as a public speaker he was often refused accommodation and refreshment due to his race.

Unaipon was the first Aboriginal writer to publish in English, the author of numerous articles in newspapers and magazines, including the Sydney Daily Telegraph, retelling traditional stories and arguing for the rights of Aborigines.

Unaipon was a recognised authority on ballistics.

Unaipon was also a researcher and witness for the Bleakley Enquiry into Aboriginal Welfare and lobbied the Australian Government to take over responsibility for Aborigines from its constituent states.

In 1936, he was reported to be the first Aborigine to attend a levée, when he attended the South Australian centenary levée in Adelaide, an event that made international news.

Unaipon proposed to the government of South Australia to replace the office of Chief Protector of Aborigines with a responsible board. He was arrested for making an attempt to provide a separate territory for Aborigines in Central and Northern Australia.

Unaipon returned to his birthplace in his old age, where he worked on inventions and attempted to reveal the secret of perpetual motion. The last full-blooded member of the Portaulun (Waruwaldi) tribe, Unaipon died in the Tailem Bend Hospital on 7 February 1967 and was buried in the Raukkan (formerly Point McLeay) Mission Cemetery. He was survived by a son.

An interpretive dance based on Unaipon’s life, Unaipon, was performed by the Bangarra Dance Theatre, while the David Unaipon Literary Award is an annual award presented for the best of writing of the year by unpublished Aboriginal and Torres Strait Islander authors.

The David Unaipon College of Indigenous Education and Research at the University of South Australia is named after him, as is Unaipon Avenue in the Canberra suburb of Ngunnawal.

Allan “Chirpy” Campbell, reported to be a great-nephew of David Unaipon, failed in an attempt to negotiate a settlement with the Reserve Bank of Australia for using an image of Mr Unaipon on the Australian $50 note without the permission of the family. Mr Campbell’s argument was that the woman (now deceased) originally consulted by the Reserve Bank was not related to Mr Unaipon.