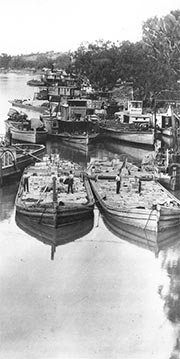 To early Europeans the Murray River was an unknown highway to the north. Captain Charles Sturt explored this ‘newly discovered’ river in 1830 with seven men in a whale boat. They found at its end a vast freshwater lake system.

Sturt’s description of the surrounding countryside led to South Australia being established in 1836. Pastoralism was the original stimulus for settlement here in Meningie and the river boat trade that followed. In the 1850s, interest in navigating the Murray River was increased due to the Victorian gold rush. By the 1880s, the river was a busy highway for trade and passengers from towns further upstream. Towns around the Lower Lakes became strategic ports for thousands of paddle steamers and barges.

The river’s value as an inland transport route was eventually limited by the unreliable and treacherous nature of the Murray Mouth.

Coorong end of the river’s run

At the far end of the vast Murray-Darling river system — which is at the economic, social and cultural centre of many communities — is the Coorong, a world renowned wetland where the Murray River runs into the sea. The Coorong and its abundant wildlife amazed early European settlers. Commercial fishing began in the 1840s and remains an important local industry. Pioneering farmers established the wool and dairy industry around the same time.

The nature of the Coorong changed when large areas of wetlands were drained to establish pastures for sheep, cattle and crops. The extent of usable farming land expanded but caused long-term changes to the environment. The quality and quantity of water in the lakes and Coorong deteriorated. During drought, this became a serious problem.